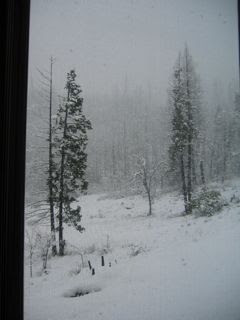 Well it started raining again and even though I had been wishing for it, worrying about it, occasionally ranting about needing it so badly, when it happened I was terribly restless all day long until the evening when I went out in the rain to walkabout. In the big house, I forget about going outside; in the cabin it was necessary. So lesson #300,000 and counting--go outside!!!! All the creeks were roaring and the silver light made the greengold moss and the almond grasses luminous and everything was alive and fresh!!! The slide between my house and Jennifer's has moved a little. Samson trudged along behind me after finishing the cat food I put out for Fatcat who still refuses to move from the cabin.
I went out to the tub for the first time in the rain. We misplaced it. The dripline off the house now falls directly on my head which is more than a little annoying. That has to be altered. So I had to wear a hat and a washcloth on my head and nevertheless sat in splendor, splatting drops on the head notwithstanding. Silver light, silver clouds moving down the river canyon and black trees silhouetted as the day fades. I'm so lucky to be here and have all this.
I have been in a quandary about going to Boston. I have tickets for March 2nd but as usual am thinking about changing them. so many considerations--the dog, Fatcat, the house and cabin, the ride to the airport. It's exhausting. And Fatcat who I trained not to jump in the laundry room window so I could keep it closed and the cold out, now refuses to go into the laundry where the window is now open hoping he will unlearn what I taught him. But he is a cat not easily fooled.
Today I woke up at 4am and lay in bed until 6am wondering if I would ever sleep again while I mulled over these dilemmas and worried and fretted until I got up and fed the fire and opened the computer and lo and behold, Cindy wanted me to take her place and so I jumped into clothes and went outside surprised at the depth of the snow. Six inches! Not much in Boston terms but I put the truck in 4 wheel drive and went on into town. When I hit the valley, all about me was a study in light and dark, white snow and black tree trunks with the river full and showing just a slight greyolive tint for contrast. Just magnificent!
It snowed all morning in town until I returned at 1pm,. It was still snowing, and I plowed the road which now held at least 10 inches! And still it continues. I remember when Jim and Glenn's house burned down when it continued like this for a solid week, more depth every morning, or how in such cases, depending on the restlessness factor, we would get the the truck, with chainsaw and shovel loaded, and go to town to tell them how tough it was out in the wilderness, anticipating the fireplace at Wee Corner and a hot buttered rum, or maybe we would just get stuck somewhere or, if not stuck ourselves, find someone else who was and help them out. Snow makes for adventure! However, I wussed out and took a bath inside, not risking getting hit on the head with the clunks of snow pack falling off the roof into the tub.
What fragile snowflakes we all are!

February and an ordinary moment

Today was still another sunny spring day although a storm is supposed to be heading in. I decided to stop fretting about water, river cfs, and snowpack and get some work done before the weather hits. I planted the rest of the herbs and brought up some old rusty tin roofing I want to use to make life impossible for the weeds around the edges of the garden and where I foolishly planted mint--a task I will regret again and again. It felt so good to be moving the body, lifting, carrying, digging and hauling and the air was soft and just the right warmth.
So I sat for a while on the porch of the cabin when I was finished. Samson came over and lay down and Fatcat came by to get pets. My sweet companions seem to like it when I return to old habits and sitting on the porch is certainly one of them. I waited, eyes half closed for the sun to move behind the locust tree, gently looking out at light and shadow and early spring and hearing the dog pant, the cat purr, a distant frog and the wind beginning to rise, expectant with rain.
Then came a long moment which lasted while in the back of my consciousness was a running murmur of tasks done and undone, wishes filled and unfulfilled, hopes dashed and still persistant. But the light and shadow of the day, the familar companions, the sweet air were held and accepted and loved in this very ordinary moment in this very ordinary day while the astounding fierceness of my love of life seared my heart through for a long period of timelessness which itself was bounded by dog pant, cat purr, frog croak, wind chime, light and shadow. I recognize once more the sacredness of the ordinary.