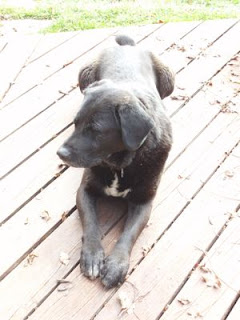 He was born under the cabin on Good Friday. Nine puppies, I could hear them squeaking and mewking under the house that morning. I had to crawl under the cabin to pull them out because some were not going to make it. I left five and loved having them around. I used to get a chair and sit and watch them play and there was no one to yell, "Leave those puppies alone, Marilyn!"
I found homes for all of them and Samson was the last to go. I called him Seven because he had that number on his chest. In typical Hyampom fashion, he went to local people, the "Felon" and his bi-polar wife who it was said treated dogs very well. So when the "Felon" beat up his wife and they left town, they left the pup. Stanley had him and knew my dog had died and so said I could have the pup back if I called him "Bill". I went to Stanleys' to pick him up and called, "Puppy, Puppy, Puppy" and this giant black floppy eared cheery dog appeared and I put him in the car and took him home. Since I wanted a hero's name, I called him Samson. Stanley still calls him Bill.
He lived with me at the cabin for 14 years, being babysat by many different caretakers and friends and everyone who knew him knew he had one of the sweetest dispositions of any dog. Cheery, polite, loving and always eagar for a ride in the truck or a hike.
The last few years he has been grey, wobbly, and incontinent but he was ready for the evening walk with me and the food bowl. Both, up until the end, could produce some jumps and excited, if awkward, playfulness.
I had gone to Ebbe and Uschi's court date and came home late, put a bowl of food in front of Samson; he didn't get up, and I went to bed. In the morning, I went out to feed him and saw his head was tweaked toward the right and he couldn't move it any other way and when I petted him I saw his eyes were moving erratically and I knew he had had a stroke. He staggered up and went outside while I cleaned up the pee and poop. Sadie, Jennifer's puppy, was coming to stay today and I didn't want her to get the idea the screened porch is the bathroom. When I finished I saw Samson had wandered down to the flat below the house and was moving clumsily to the right which was leading him off into the brush.
It was a frosty, cold, patchy-snow morning. and the sky had scattered clouds of lovely grey blue, silver and gold. The snow on the branches of the brush shone with pristine white brilliance as I walked down to him. He was dazed and disoriented and I had to get up close to him to let him know I was near. I finally got him to follow me slowly, so slowly back towards the house and at the driveway, Rich and Jennifer came bringing Sadie. Rich picked him up and put him in the truck and I got blankets and covered him but he stood up one last time as the truck drove him into the garage. His favorite ride!

I called Ebbe and Uschi and told them he had had a stroke and looked bad and in an hour or so they came. Ebbe said it was a major stroke. By this time Samson had vomited and I had cleaned that up and he drank some water, but now was lying pretty still, covered with some blankets and the sheepskin to keep him warm. It was pretty obvious he was dying. Ebbe said he was in pain, he could tell from the way his mouth was moving and that his heart was very strong and he could last a few days to a week, but he would suffer, so we decided to put him down. Ebbe gave him enough for a 300 lb animal and Samson relaxed and went into a sleep while we petted and loved him and told him what a good dog he was. He even stopped breathing but then started again and finally Ebbe said, he's just having a nap! Ebbe had to drive all the way back to his house to get more drug and Uschi stayed right with Samson and me all that time, petting him. He actually started waking up and one or twice snored!
By the time Ebbe was back, though, he was again tense with pain with the neck twisted and the eyes going back and forth erratically. We tried again and, finally Ebbe said his heart had stopped. Jean Pierre and Christina came up and brought him a crystal. They took care of him the last time I was gone and loved him. The little puppy, Sadie, oblivious, was all this time full of life and curiosity, chewing on wood and tearing up paper sacks and being a puppy and the whole cycle of life was played out that afternoon while the snow showers came and went and Samson got loads of pets and loving from everyone there to send him on his way.
I like to think he wasn't ready the first time until he soaked up more love to smooth his way out of this world.
Even though I knew death was coming, it is a shock to have it arrive. Death is unlike other catastrophes. The death watch is focused, concentrated, loving and tearful. I'm so glad I could be there for my mother's death and now this favorite dog's death. But when they say, "It's over. The heart has stopped," for those left behind, death has only begun.